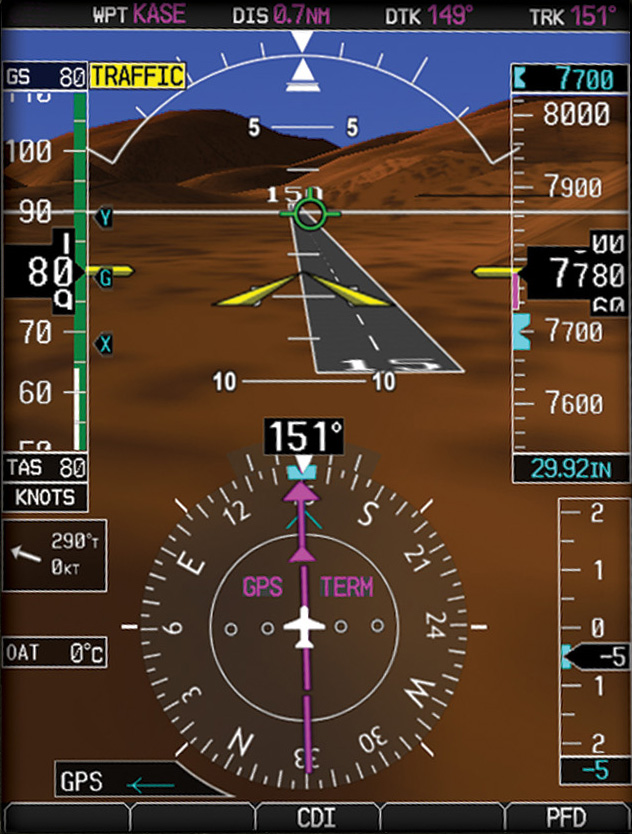 Synthetic Vision Display from the Left Side PFD of a Garmin G500. Click to enlarge.

NexAir has worked with many customers to configure and install their ideal Synthetic Vision solution — SynVis for short — from full-blown glass cockpit installations to software based Synthetic Vision upgrades. Let’s look at the concepts behind SynVis and some options you’ll want to consider. When you’re ready, email Dave Fetherston or call him at 877-318-0975, and start an informed conversation with the experts at NexAir. We’ll help you select and implement the best SynVis solution for your flying needs.

Shown above and to the right is the Synthetic Vision display of a Garmin G500 PFD. During this landing to Runway 15, you can see all the normal elements of a PFD such as Attitude, Altitude, Airspeed, VSI, and HSI. But shown behind these basic flight instruments is a synthetic 3D visual representation of the sky, runway, terrain and obstructions.

At it’s core, SynVis uses a process called Sensor Fusion combined with a very good 3D rendering. SynVis uses your position and altitude (GPS-derived), and airframe orientation data (from an Attitude and Heading Reference System using solid-state gyroscopes, accelerometers and magnetometers), together with a database of terrain, obstacles, airport infrastructure, and even real-time traffic data, to synthesize a highly accurate 3D representation of the world around you. This synthesized 3D representation is displayed on your 2D primary flight display (PFD) or multi-function display (MFD). 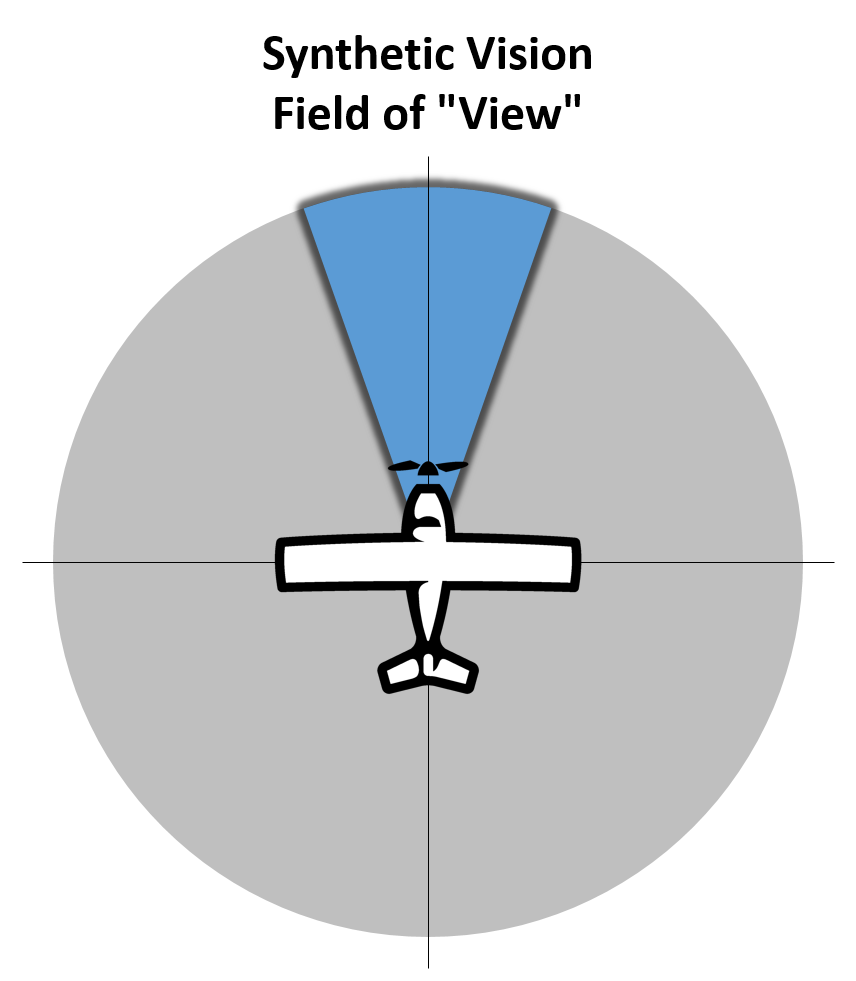 Synthetic Vision only displays a limited field of view in the forward direction.

Its greatest benefit is the boost in confidence you get when you can “see” through clouds, rain, or fog during an instrument approach. You’ll see the runway from a long way out, and see it grow in size as you near your MDA or DH. When you break out, the runway should be right where you expected it to be. If you don’t break out, SynVis will show the runway sliding underneath you as you reach the MAP and go missed.

SynVis makes it easier to maintain awareness of terrain that’s in front of you, especially if you’re flying below the peaks of nearby hills or mountains. SynVis also displays obstacles from the obstruction database, so keep this database updated and remember that many obstructions are erected between database updates. Shown below is Synthetic Vision as implemented on an Avidyne Entegra Release 9 Integrated Flight Deck. 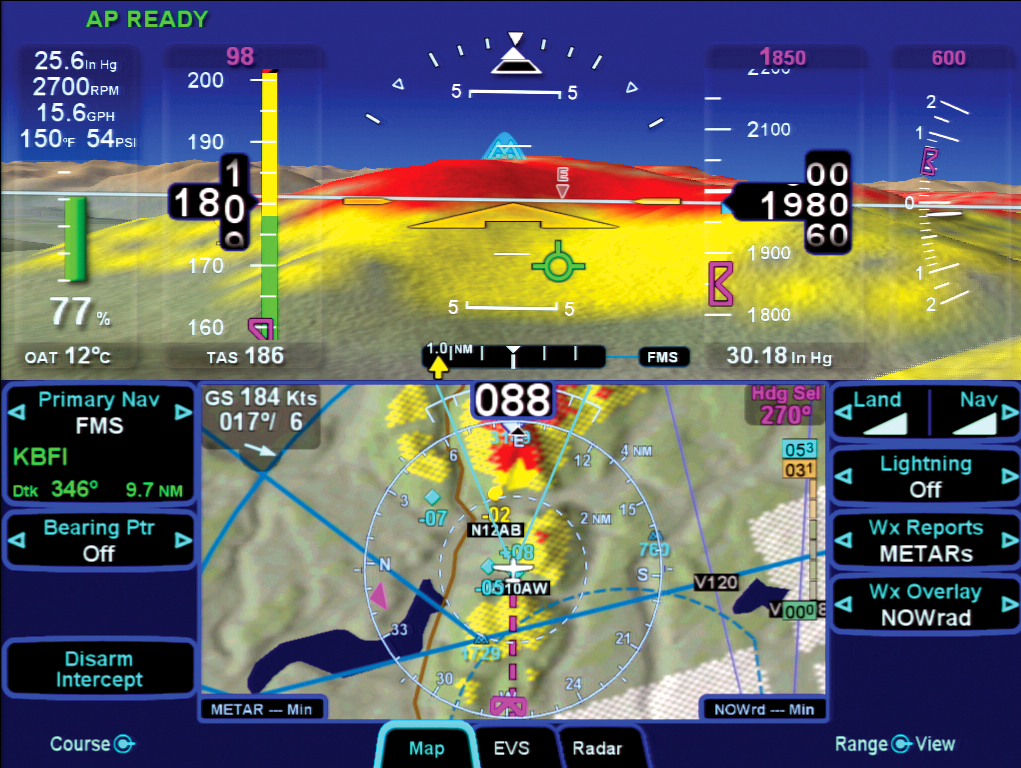 How Much Synthetic Vision Do You Need?

At its most basic, Synthetic Vision systems come in Good, Better, Best configurations. 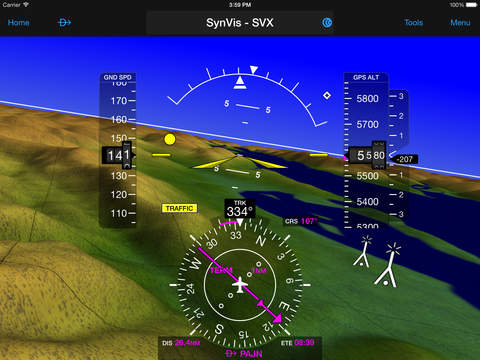 SynVis shown within the Garmin Pilot app when used in conjunction with a GDL 39 3D. Click to enlarge.

Good could be an iPad mounted to your yoke running a flight management app that includes Synthetic Vision functionality. For many apps, SynVis is an optional add-on.

The big problem with SynVis on any yoke-mounted device is the fact that the yoke is always twisting right and left with every flight maneuver, so your virtual SynVis world is rocking and rolling, too, making proper interpretation of your flight attitude difficult at best. Note the yellow dot at your 11:30 low; that’s a traffic target symbol. 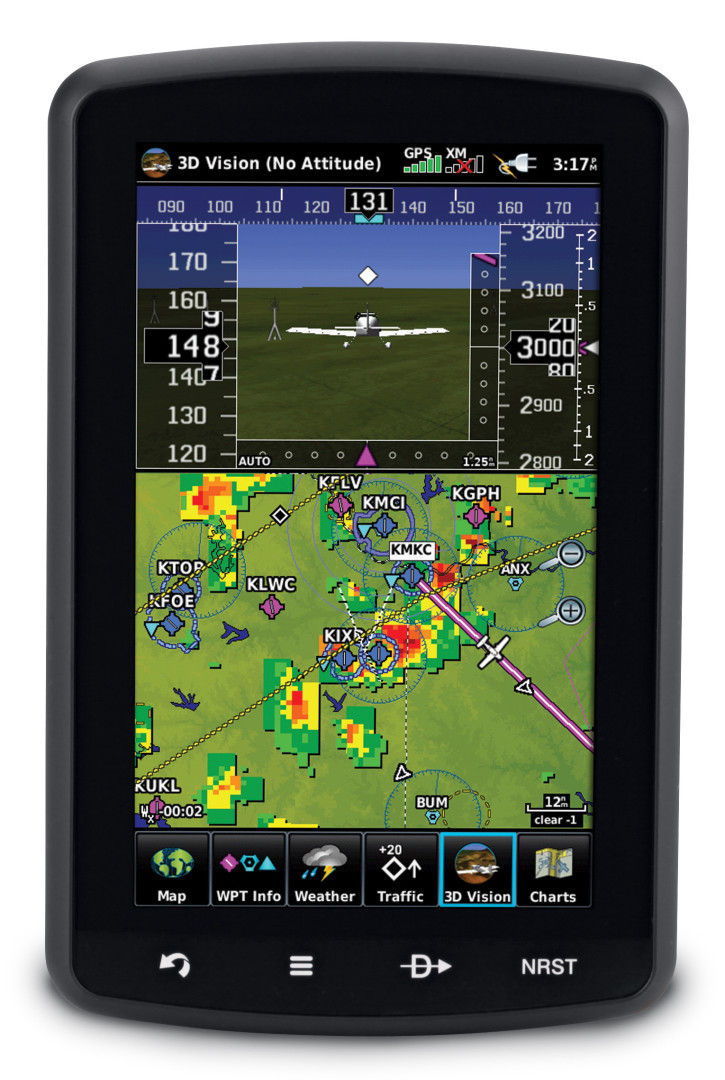 Better could be a dedicated aviation portable GPS such as the Garmin aera® 796 in a panel dock. The big advantage of a docked aviation portable is that the portable is fixed in reference to the panel, so the SynVis display matches the actual orientation of your aircraft. The SynVis heads-up display can then serve as a backup Attitude Indicator — something that’s imprecise and impracticable to do with a yoke-mounted tablet. 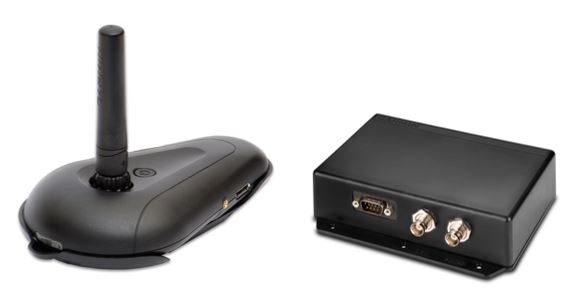 AHRS – Attitude and Heading Reference System
Both the iPad and the docked aviation portable require the use of an AHRS to supply airframe orientation data to the SynVis display. Modern AHRS use solid state MEMS gyroscopes, accelerometers, and magnetometers to supply this information. The Garmin GDL 39 3D is an ADS-B In receiver that supports both 1080 MHz and 978 MHz. In its “3D” version, the GDL 39 also includes a supplemental AHRS that supplies data to many Garmin aera® products, as well as to the Garmin Pilot app running on iPad or Android devices. Shown here are the Garmin GDL 39 3D in its portable (left) and installable (right) versions. Connections are available via Bluetooth and/or hard wired.

Best would be a glass cockpit upgrade with a PFD that displays your SynVis view on your PFD, directly in line with the pilot’s forward view out the windshield. There are three primary suppliers that are typically used to implement PFD-based SynVis upgrade solutions; they’re shown below in escalating levels of size and sophistication. All the these systems use sensor fusion to integrate data from GPS, AHRS, and multiple databases to generate their SynVis representations of the forward view. 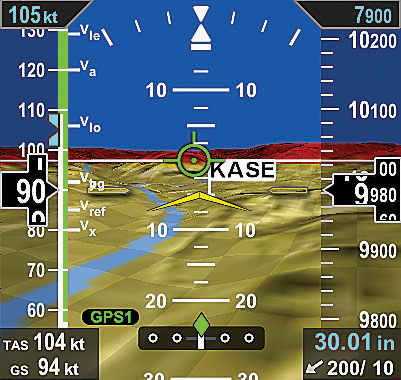 Aspen Evolution Synthetic Vision as shown on the Evolution 1000 Pro PFD. Click to watch a marketing and training video about Aspen’s ESV on YouTube.

Aspen’s Evolution Synthetic Vision (ESV) — This is an optional software-based upgrade for the Evolution Flight Display System. ESV presents a real-time, computer-generated 3D view of terrain, obstacles, and traffic. The synthetic rendering simulates the view from the cockpit on a bright day, so it’s especially helpful to provide enhanced situational awareness when flying during conditions of reduced visibility or darkness. ESV allows the pilot to select between a wide field of view for en route operations, to a narrow field of view during the approach phase of flight.

Shown above and to the right is Aspen’s Evolution Synthetic Vision as Shown on the Evolution 1000 Pro PFD. Click the image to watch a marketing and training video about Aspen’s ESV on YouTube.

Garmin G500 or G600 PFD/MFD — Garmin’s Synthetic Vision Technology, SVT™, is now standard on the G600 and optional on the G500. It can also be added to any older G500 or G600. SVT™ uses sophisticated graphics modeling to create a virtual topographic landscape from the G600/G500’s terrain-alerting database. This enables the primary flight display (PFD) to show a clear 3D depiction of ground and water features, airports, obstacles, and traffic – all shown in relative proximity to your aircraft. Instead of a flat blue-over-brown flight display, pilots see an in-depth perspective view of realistic terrain features rising into the sky. Shown below is the Garmin G600 PFD/MFD with SVT™. Click to watch a Garmin marketing video about SVT™ on YouTube. 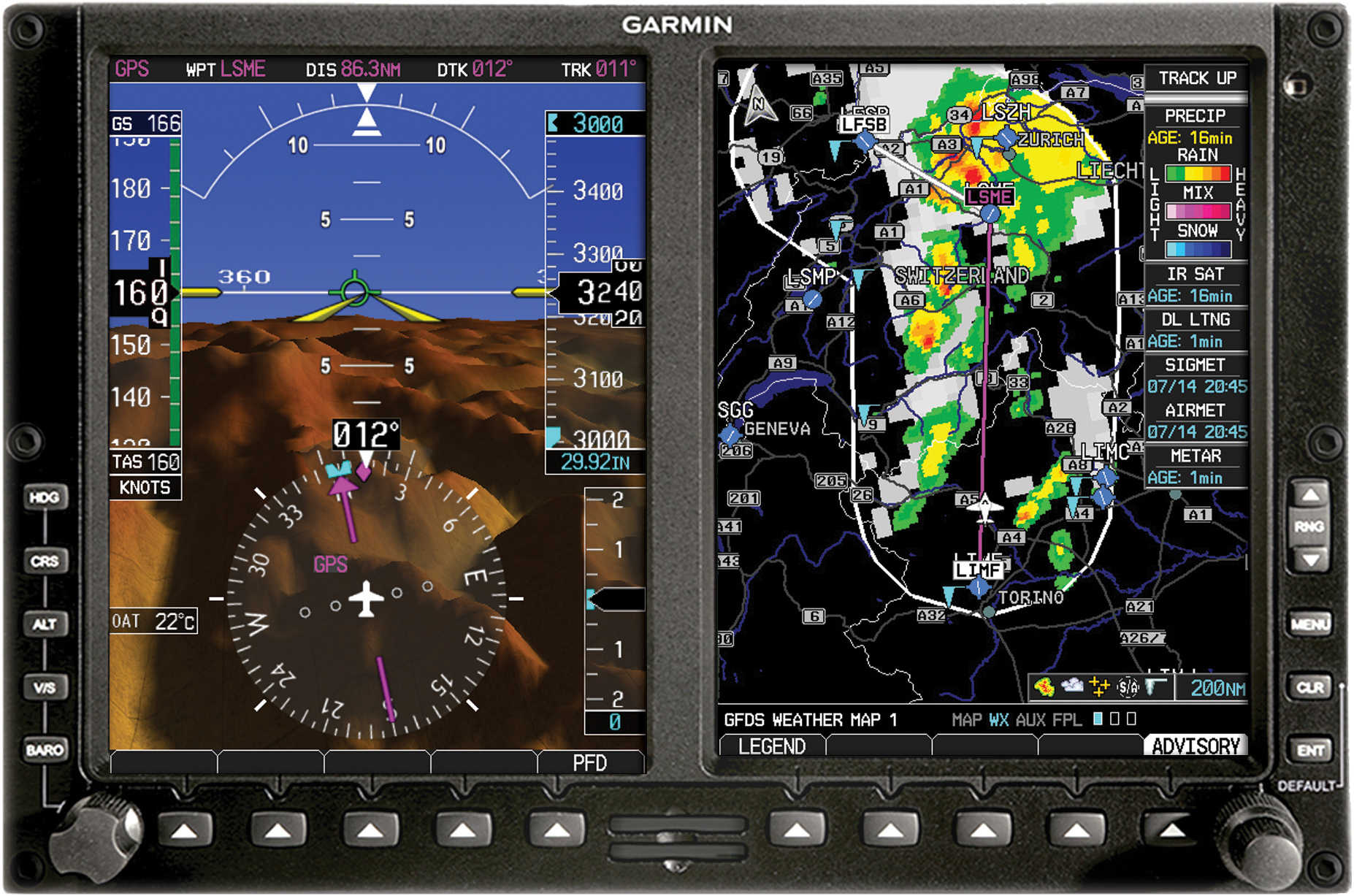 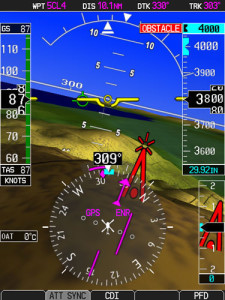 Avidyne’s Synthetic Vision (SVS) — Avidyne’s Entegra Release 9’s Synthetic Vision uses 9 arc-sec terrain data to display a three-dimensional scene representing an “egocentric” out-the-window view. SVS provides a graphical presentation of three-dimensional terrain and water, obstacles, and traffic, and includes the addition of a Total Velocity Vector (TVV) on the primary flight display. The TVV provides a visual representation of the aircraft flight path, indicating where the airplane is going, which is not necessarily where the aircraft is pointing. METAR-colored flags make it easy to locate airports in the 3D scene, and based on the approach you’ve entered in the FMS, the selected runway at your destination airport is highlighted for additional clarity and ease of identification. Shown below is Avidyne’s Synthetic Vision running on Entegra Release 9. Click to enlarge.

Avidyne’s SVS has an innovative selectable horizontal field of view (FOV), which provides pilots with the ability to adjust the 3D zoom setting of the terrain presentation on the display. The default field of view is 45 degrees for normal flight. However, a wide-angle 120-degree field of view setting provides more ‘peripheral vision’ when maneuvering in mountainous areas, while the 20-degree close-in view might be used to zoom in on a distant airport, allowing you to actually verify a runway heading from a greater distance away.

SVS also provides color-coded Terrain Awareness that displays yellow and red hashed-patterns overlaid on the terrain display correlating with terrain that is 101 to 500 below your current altitude (yellow) and terrain that is 100 feet below to anything above your current altitude (red). Avidyne’s unique Forward Looking Terrain Alerting (FLTA) feature provides an extra measure of safety by dynamically displaying a solid yellow or red impact point based on the projected flight path. Shown below is a split screen PFD with synthetic vision (SVS) on top and a FLIR-based Enhanced Vision System (EVS) on the bottom. Scroll down to learn more about Enhanced Vision Systems. Click to enlarge. 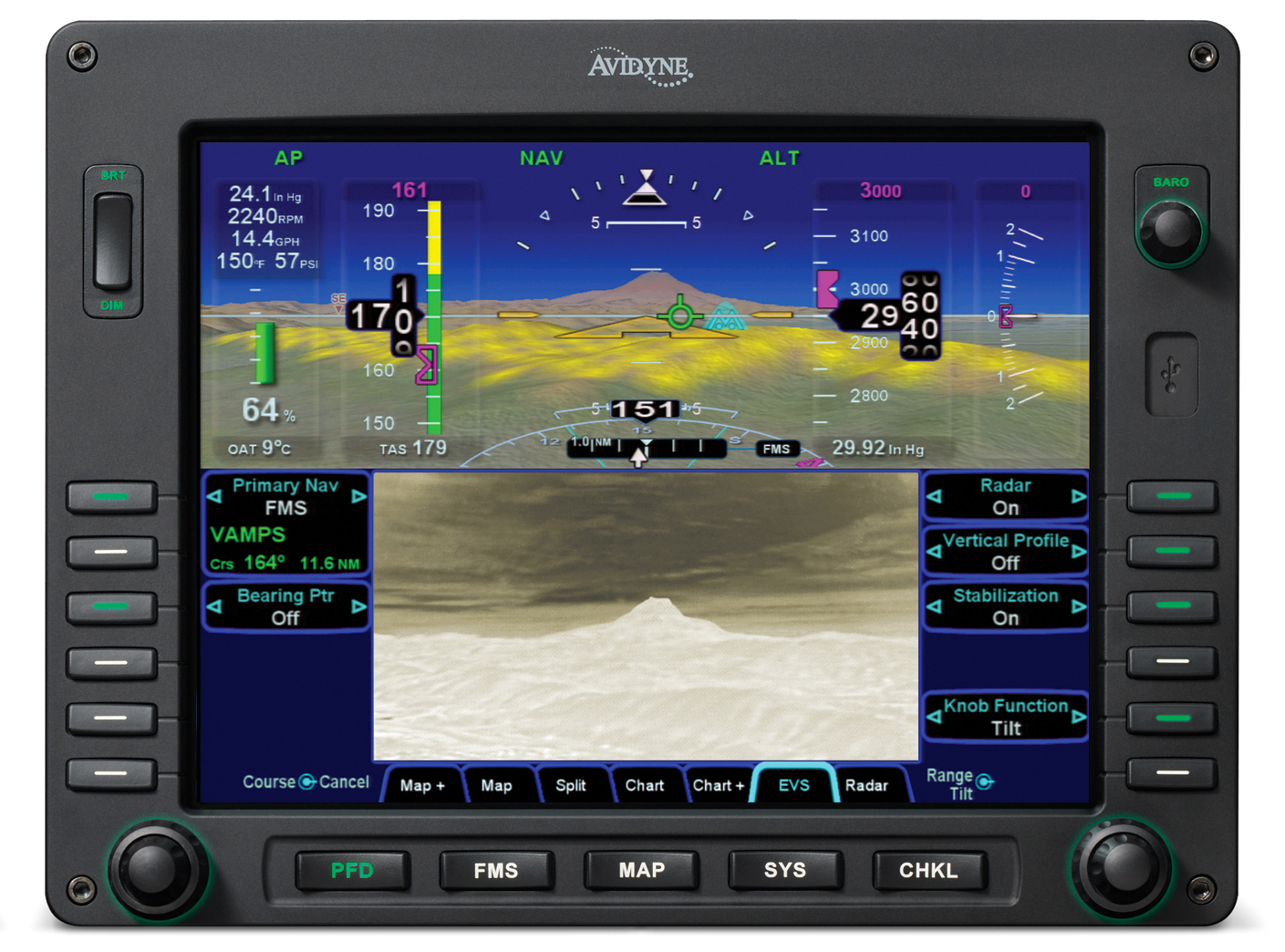 Split screen PFD with synthetic vision (SVS) on top and a FLIR-based Enhanced Vision System (EVS) on the bottom. Click to enlarge.

Synthetic Vision is just that — a completely fake, albeit accurate visualization of the flight environment created through sensor fusion and 3D rendering. SynVis can only show you where you are in relation to things that it knows about within its databases or that are fed to it from an ADS-B or other traffic system. So if a herd of deer head out onto the runway you’re landing on, SynVis will NOT show you those deer.

Enhanced Vision Systems (EVS) use actual cameras and other sensors such as Forward Looking Infrared (FLIR) and Milimeter Wave RADAR, to sense the environment outside the aircraft. They display a real-time video image of the forward view on the PFD, MFD, or heads-up display. So an EVS will show you those deer that have run out onto the runway. The following YouTube video shows a landing in Aspen, Colorado, which compares the view from a FLIR camera (left) with a visible spectrum camera (right). 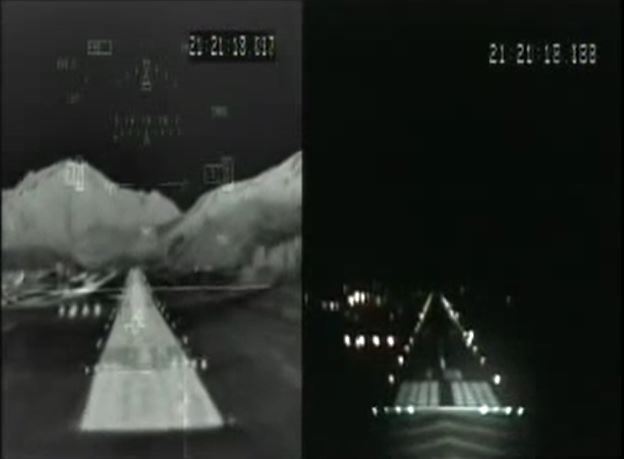 If you’ve seen something here that sparks your imagination, get the conversation started. Email Dave Fetherston, call him at 877-318-0975, or submit an online Request for Quote or Request Repairs or Maintenance short form. We’re ready to collaborate with you so that you, too, can have a smarter plane and be a smarter pilot.